Two in five young drinkers are mixing alcohol and energy drinks, putting themselves at risk of a range of health problems.

According to new figures from not-for-profit research group the Sax Institute, published on Thursday, a large number of people are consuming both substances at once, to the concern of health experts who believe there is a lack of awareness of the way energy drinks can affect the body.

The research comes from two surveys. The first surveyed a group of close to 3000 people over 16 with a median age of 23 living in NSW, finding roughly 40 percent of this group had consumed alcohol mixed with energy drinks in the past 12 months. 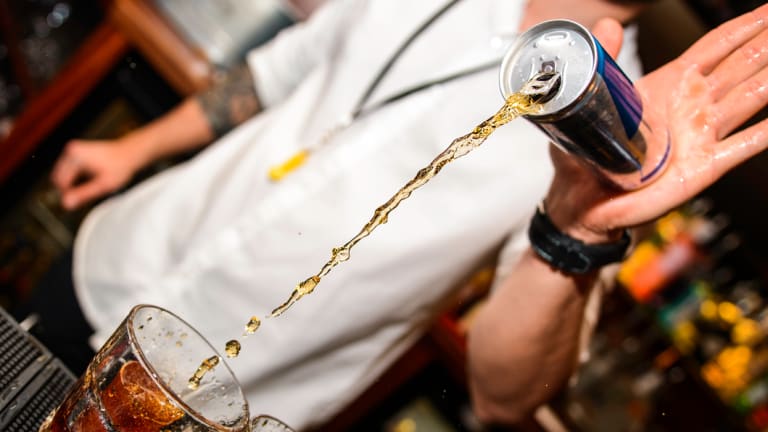 Red Bull is a popular mixer in nightclubs. Photo: Shutterstock

In a second survey, which spoke to people with a median age of 21 years out in entertainment districts in Sydney, Newcastle, and Orange, researchers found 15 percent of people had consumed alcohol mixed with energy drinks in the previous 12 hours.

Dr. Amy Pennay, a research fellow at La Trobe University’s Centre for Alcohol Policy Research and lead author of the study, said the surveys confirmed other research showing people who drink energy drinks on a night out are more likely to also consume large amounts of alcohol.

“This is either because energy drinks make them think they can consume more alcohol, because they reduce the sedative effects of alcohol, or it’s because people who always intended to have a big night out choose energy drinks as part of their repertoire of a big night out,” she explained, adding that academic opinion is leaning towards the latter.

“It may be that the marketing of these drinks is more likely to appeal to men,” she said.

A March 2017 meta-analysis of 13 studies, published in the Journal of Studies on Alcohol and Drugs, found people who consume energy drinks with alcohol on a night out have a higher risk of injury from car accidents and physical fights.

The majority of drinkers surveyed had consumed more than two 250mL energy drinks in a day, the recommended maximum daily intake of energy drinks under the Australia New Zealand Food Standards Code. A standard small can of Red Bull, sold in a four-pack, is 250mL.

“It seems to be that when people go out and have a big night, they drink more than the guidelines state,” Dr. Pennay said. “Of course, people do that with alcohol, as well. But we should be mindful that this causes a range of negative health implications for some people.”

There is evidence that the consumption of energy drinks can lead to heart arrhythmias and anxiety, among other health problems. They are not recommended during pregnancy.

Professor Chris Semsarian, a cardiologist at Sydney’s Royal Prince Alfred Hospital, said energy drinks affect the body in three ways: they can increase a person’s blood pressure, increase their heart rate, and, as was demonstrated in a 2010 University of Adelaide study, disrupt the function of platelets in the blood, which can lead to blood clots.

“They should be avoided by anyone with an underlying inherited heart condition, such as a rhythm disorder like long QT syndrome, cardiomyopathies, or other heart muscle problems,” Professor Semsarian said.

In addition to these risks, consumers may not understand how much of an energy drink they have consumed when they are out.

“Our concern with licensed venues is that they’re ‘free-pouring’,” Dr. Pennay said. “If you’re given a can you know how much caffeine you’re having, or you can look it up, but if you’re having cocktails or just pouring into a tall glass, people don’t know.”

At Melbourne’s Spice Market nightclub, there are no cocktails with energy drinks on the menu, although a spokesperson said their most popular energy drink and alcohol mixed drink combinations are vodka and Red Bull, followed by Jägermeister and Red Bull (known as a “Jäger bomb”).

In June this year, a 15-year-old Sydney girl died after consuming a mix of alcohol and energy drinks. However, her blood alcohol level was at 0.4, within the lethal range.

With a standard energy drink can containing up to 500mg of caffeine, five times more than a cup of coffee, Professor Semsarian said there needs to be a greater awareness of the risks associated with energy drink consumption, even when it is not consumed alongside alcohol.

Last month, UK Prime Minister Theresa May announced she planned to ban the sale of energy drinks to under-16s. Professor Semsarian has previously called for restrictions on the sale of the drinks to young people in Australia.

“These drinks do not just contain caffeine, they contain guarana and other ingredients,” he explained, adding that the way they are consumed is very different to other caffeinated products.

“Coffee is hot, you drink it slowly, and you don’t have four of them at a time.”